Updates during the week!

END_OF_DOCUMENT_TOKEN_TO_BE_REPLACED

Maybe it’s only fitting that one of the most influential musicians of all time had a hand in the creation of electronic music, even though it was nowhere near his scene. The oeuvre of Miles Davis is, yet, still cherished predominantly by hard bop fiends and fusion fans. Although he spent the majority of his career playing variations of those styles, there is one record that stands out from the rest of his catalogue by virtue of its mission, accomplishments, and subsequent oblivion from accolade and popular memory: On the Corner.

The record, released in 1972, was Davis’ attempt to lure young, African-American city dwellers back to the jazz they had forsaken for other genres (among which was the funk that his own fusion escapades helped to engender). Although the record features a variety of canonical jazz musicians (Jack Dejohnette, Chick Corea, and Herbie Hancock, among others), much of the music is anchored by rhythms very similar to today’s drum-n-bass. Davis and his producers, themselves innovators in electronic music, experimented with looping and splicing tracks, making OTC one of the first records to prominently feature these now-widespread audio manipulation techniques. Interestingly, Davis himself is only sparingly on the record, and then mostly as background noise.

Electro friends probably opt to stay away from Miles Davis’ music just as much as his followers tend to shy away from the electro scene. Unfortunately, OTC has been tucked away into the back of Davis’ catalogue, garnering little play and even less discussion as to its place in the jazz canon. It is fair to say that this record has had minimal impact on jazz, at least compared to Davis’ other records. I see that comparison as problematic in and of itself; this record shouldn’t be talked about as jazz or by jazz people. Electro fans owe it to themselves to check out this precursor to any and all of their favorite bands, even if it bears the name of that guy their high school band director was always harping on; this is, simply, one of the first, and thus by extension, one of the most important, accessible electronic music records ever made. 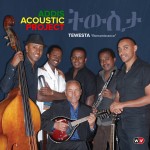 Comprised of some of the outstanding acoustic musicians Addis Ababa has to offer, the Addis Acoeustic Project brings forth Ethiopia’s pop tunes from the 1950s and 1960s in a new light. Directed and arranged by guitarist Girum Mezmur, the Addis Acoustic Project unfolds vintage Ethiopian music from that era in a fresh way. With influences of traditional East-African, Jazz, and Latin musical styles, these pieces have time and again won the hearts of many Ethiopian and World Music lovers alike.

The band, made up of veteran musicians such as Ayele Mamo (Mandolin), as well as contemporary musicians such as Girum Mezmur (Guitar/ Accordion/Leader), Henock Temesgen (Double Bass), Nathaniel Tessema (Drums), Dawit Ferew (Clarinet), and Mesale Legesse (Kebero/Percussions), produces unique sounds dear to most Ethiopians and has attracted a greater world music audience.

END_OF_DOCUMENT_TOKEN_TO_BE_REPLACED

Marc Ribot and Nels Cline paired up for this guitar duo set on the recent anniversary of Le Poisson Rouge (June 15th). For an hour and a half, over the course of 7 morphing, improvisational sound pieces that ranged from country to rock, through psychedelic noise, to jazz and back, the two legends of guitar traded licks, riffs, tones, dissonance, space – and they shared time, all in front of a sold out crowd that likely included musicians, journalists and New Yorkers on the avant-garde scene who remembered the heyday of Tonic and the old Knitting Factory when shows like this were much more common.

END_OF_DOCUMENT_TOKEN_TO_BE_REPLACED

A month ago I went to the Summer Stage in Central Park to check out Yo-Yo Ma’s Silk Road Ensemble. After short I felt that Yo-Yo wasn’t my thing for the night. So I left and decided to take a walk in the park. While walking I heard some drum sounds which sounded like Korean traditional drums. I followed the drum sounds to find out who was playing. After two, three minutes I found three young men playing two tenor saxophones and a simple drum set.

From the moment I walked towards them I knew it was going to be an exciting outdoor concert… Blasting their drums and saxes, Moon Hooch, which was the name of the band, thrilled the people around them.They were playing energy music. It was fun watching three young enthuastic musicians who played so passionate. They proved that music is still essential in our lifes. Hope they don’t lose this positive energy and keep going.