Who’s Marco Lienhard? What does he do here in NY? Oh, he’s a musician. No kidding. What makes him different from other musicians in NY? Many of these questions he’s going to answer in the video interview.

I have known Marco for more than thirty years. We met in Osaka, Japan, when we were thirty years younger. At that time I studied Kendo at a sports college and had just started playing sax. Marco, as far as I can remember, was an exchange student. We both were young and starting our adult lives far in the Far East. Both of us had no idea that we would stay in Japan for a very long time and would master a specific Japanese art. Marco is one of the first Europeans to learn and master the shakuhachi and taiko drum in Japan, and I myself become a Kendo master. In 2008 NY brought us together.

It is very interesting for you to know that people like Marco and me know more about Japan, the Japanese people and Japanese culture than the Japanese themselves. You might think, how can he say that? But it’s true because it’s a matter of fact that the majority of Japanese don’t know anything about Japanese classical music and their classical instruments? It’s unbelievable that a country like Japan lost track of many of its roots by the invasion of American and European cultures after the Second World War.

END_OF_DOCUMENT_TOKEN_TO_BE_REPLACED

Taikoza uses the powerful rhythms of the taiko drums to create an electrifying energy that carries audiences in a new dimension of excitement. The taiko is a large, barrel-like drum that can fill the air with the sounds of rolling thunder. Roughly translated, taiko means big drums – and that’s exactly what Taikoza brings. Big drums, powerful rhythms, and electrifying, room-thumping energy. This exciting group draws from Japan’s rich tradition of music and performance to create a highly visual performance.  Drawing from Japan’s rich tradition of music and performance, Taikoza has created a new sound using a variety of traditional instruments. In addition to drums of assorted sizes, Taikoza incorporates the shakuhachi, the fue (both bamboo flutes) and the Koto (a 13 string instrument).

Taikoza’s new CD has been nominated as best Asian Ethnic Album for the Just Plain Folks Music Award. Taikoza has appeared on different TV programs such as Macy’s Thanksgiving parade, the History Channel in “History vs. Hollywood” and ESPN S.U.M.O: The battle of the Giants. Taikoza is featured in the Movie: The Commute.

END_OF_DOCUMENT_TOKEN_TO_BE_REPLACED 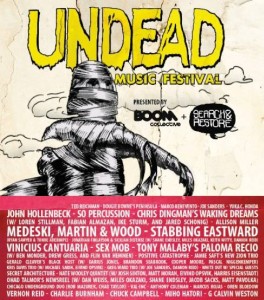 May 9-12 2012, BOOM Collective and Search & Restore bring you the Undead Music Festival for

4-days, featuring more than 200 musicians in over 20 venues across the country and beyond.

END_OF_DOCUMENT_TOKEN_TO_BE_REPLACED

The idea of blending two different cultural influences in art or music is not new. In fact, the idea has been going on for centuries. It is only now that it is so noticeable, due to the process being accelerated by communication and other technology.
A recent intriguing step in this path is the CD and tour by Anoushka Shankar; daughter of illustrious sitarist and musical ambassador Ravi Shankar. No stranger to multicultural experiments, Shankar has brought about an intriguing blend of Indian raga and Spanish flamenco. According to historical evidence, flamenco’s distant roots are in 9th century India. Punjabi “untouchables” fled persecution and wandered the Middle East and Asia; eventually settling in Europe. There has been, however, little speculation of the common roots of the theory of this music.

END_OF_DOCUMENT_TOKEN_TO_BE_REPLACED

Date: April 15, 2012
Venue: Symphony Space (NY)
Concert review by Aida Shahghasemi
Mohammad-Reza Lotfi, the virtuoso tar and setar player came to the Symphony Space stage on W. 96th street after almost ten years of absence from New York City. As he regularly does, Lotfi walked on with his white cotton shirt and pants and gracefully carried himself to the point of readiness, legs crossed, tar in hand,  looking up at another world for the initial inspiration. On his side, he had his loyal tombak player, Mohammad Ghavihelm. 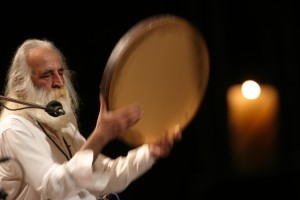 Lotfi began his career over forty years ago. He was born in 1947, in Gorgan, a northern province of Iran. Encouraged by a musical family, he delved deep into playing tar and soon he was the student of some of Iran’s biggest traditional music masters such as Aliakbar Shahnazi, Habibollah Salehi, Hossein Dehlavi, Abdollah Davami, Sa’id Hormozi, and Nourali Boroumand. His studies carried him to Western classical music conservatories, where conducting, composing, and orchestral membership became additional areas of study and fascination. Lotfi rose out of a fertile cultural and musical era in Iran. The seventies holds memories of influential individuals such as Dr. Dariush Safvat and initiations such as the Center for Preservation and Propagation of Iranian Music, from which some of the most prominent Persian Classical musicians of today prospered. These include Mohammad-Reza Lotfi, Hossein Alizadeh, Parisa, Hossein Omoumi, Naser Farhangfar, Dariush Tala’i, Majid Kiani, and Mahmoud Farahmand.