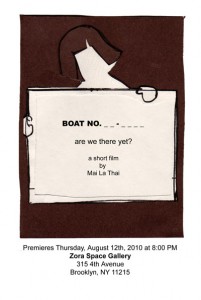 Mai La Thai is an art director and filmmaker based in New York City. She has received numerous international awards in different disciplines throughout her career. The International Academy of Digital Arts & Sciences recognized her twice for her online short films. The film “Goal” was commissioned by Nike in 2006 for the World Cup and was subsequently featured in Shots UK. She received a second nod from the Academy in 2010 for “A Toast to Memo.” La Thai creates bodies of work influenced by her upbringing.