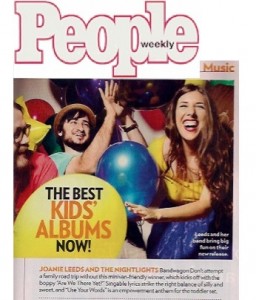 TELL ME A LITTLE ABOUT YOURSELF………..Hi! I’m Joanie Leeds and I have the best job on the planet!I write and perform kids music with my band, Joanie Leeds & The Nightlights rocking out at schools, music festivals, performing arts centers, museums & rock music venues across the country. I have released 5 CDs and 1 DVD to date and our songs are heard on many radio stations across the country including Sirius/XM Kids Place Live. Our CDs have been giving top honors and put on various “Best Kids CD” Lists – People Magazine, Parents Magazine, Washington Post, NY Post, Time Out NY Kids…

WHY AM I PRODUCING THROUGH KICKSTARTER…AGAIN!?

END_OF_DOCUMENT_TOKEN_TO_BE_REPLACED

I have been knowing the singer-song writer Joanie Leeds for a while. She was my neighbor in my previous apartment building. And her husband Dan who’s a very talented drummer and playing in Joanie’s band became my friend later. In fact we have been sharing a studio in Williamsburg. Anyway…I think Joanie does a great job creating music for children and teaching them the essence of music. I think educating children about music is one of the few ways to create human beings for the future.

A child who really loves music and becomes a musician later can’t become inhuman. So we need young musicians like Joanie around us and I think we should support them emotionally and financially. So please check out her KICKSTARTER campaign and see whether you would like to be involved in this campaign.

Joanie’s message: “Hey Everyone! My name is Joanie Leeds and I am a nationally touring singer/songwriter from Brooklyn, NY specializing in Kindie-Rock (that’s kids music for y’all not hip with the lingo…yet)…My band Joanie Leeds & The Nightlights are putting out a new kids album called BANDWAGON. Get up on it and help make it a reality…”