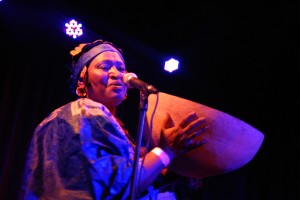 Khaira Arby’s set at the Bell House in Brooklyn started as a praise song to Allah. The first line to the Koran “Bismillalla Allah il Rahman il Rahim”…..reverberated up to the rafters. Arby is paying homage to the female singers of Mali who were historically only allowed to sing religious songs.

END_OF_DOCUMENT_TOKEN_TO_BE_REPLACED 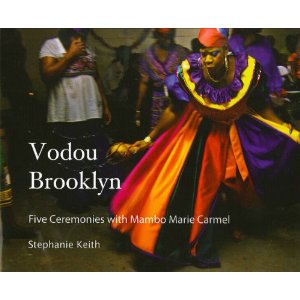 In Vodou Brooklyn, Five Ceremonies with Marie Carmel, photographer Stephanie Keith captures the frenetic and sometimes severe essence of what Haitians practicing Vodou call the lwa or spirits.  Each lwa represents a tunnel of darkness alight with an internal divine/human adventure of the unknown.  Stephanie Keith earned a Master’s degree in photography from New York University and a certificate in Photojournalism from the International Center of Photography.  While embossing her professional career with photos and articles published in the New York Times, Rolling Stone and the Christian Science Monitor, she was called to explore local themes of religious adherence and popular culture.Three years ago she was invited to a party in a Brooklyn basement. Ms. Keith’s first attendance to a Haitian ceremony was no ordinary jam, but one replete with and women and men proffering themselves, beaming hubris peacock-style, as potential mates.  Ms. Keith entered an uncharted dimension and became a puzzle piece to a larger specific ritual of drumming from an ethereal reservoir of elements that descend into experienced human forms. The spirits are sought for their cosmic powers as political and social stars of improvement and placation in Haitian life.