Secret Chiefs 3 (SC3), an instrumental rock band formed by Trey Spruance played a show for an enthusiastic crowd in the round at Le Poisson Rouge, October 21. SC3 is the name for seven different groups of musicians and has a rotating roster of members, each representing different facet of Spruance’s musical eccentricities. While I consider SC3 firmly in the rock genre, there are many other facets to their music (Cuban, Motown, Indian, Arab, death metal, and in particular Persian), Spruance’s interest in Iranian music, culture, and philosophy has given SC3 a distinctly Persian flavor.

END_OF_DOCUMENT_TOKEN_TO_BE_REPLACED

During my last week in Tokyo one of my favorite US bands played at the Stone in New York: the Secret Chiefs 3 (SC3) led by guitarist and composer Trey Spruance (formerly of Mr. Bungle and Faith No More). A band which fuses Persian music, surf rock, heavy metal, film music and electronics. Luckily I found videos of this show in YouTube. SC3 has always been a general name for several different bands. “Each representing a different aspect of a musical and philosophical intersection.” That night SC3 played under the name of Ishraqiyun,  a six piece band with following members: Trey Spruance (guitar, saz), Ches Smith (drums), Timba Harris (violin, viola), Toby Driver (bass), Shahzad Ismaily (bass) and April Centrone (percussion). They mainly used Middle Eastern (Persian) melodies and rhythms adding sounds of western metal, surf rock, and noise.

Last year in November I had the chance to see this band for the first time at Le Poisson Rouge. Me as an Iranian this concert was a revelation: Trey proved that Iranian or Persian music can “rock” and can “move” US rock fans. After the show Trey I interviewed him backstage (watch the video here).

END_OF_DOCUMENT_TOKEN_TO_BE_REPLACED 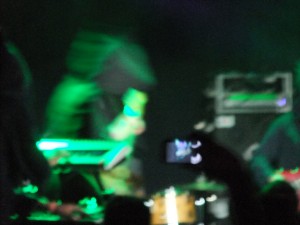