Dear Sohrab,
We regret to inform you that, due to circumstances beyond our control, our press conference at City Hall has to be postponed.  Because of a major press conference from the Council Speaker, the J4JA press conference will be moved to a later date to ensure adequate time and attention.  We apologize for any confusion, and we will make an announcement as soon as the new date is set.
END_OF_DOCUMENT_TOKEN_TO_BE_REPLACED 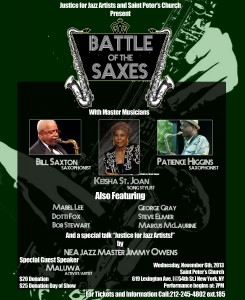 Justice for Jazz Artists will gather at St. Peter’s Church Wednesday evening for great music and a talk about obtaining basic security for musicians who are needlessly struggling in New York City.
J4JA  attempts to work with the most successful, affluent clubs around the City to find common sense solutions for musicians who are often forced to retire into poverty  or near poverty after long productive careers.

END_OF_DOCUMENT_TOKEN_TO_BE_REPLACED

The J4JA Brass Band will be in Union Square Park on Thursday, as we spread the word about the Justice for Jazz Artists campaign and keep the pressure on Danny Meyer’s Union Square Hospitality Group, the owners of the Jazz Standard.

Join us as we tell NYC jazz club owners that we are not going away, and that jazz musicians deserve fair working standards!

END_OF_DOCUMENT_TOKEN_TO_BE_REPLACED

This time again I can’t make it because I have a gig with my band SoSaLa at Nublu. But…I’ll do my part by wearing the J4JA t-shirt when performing “Low Key Blues.” which is dedicated to this campaign and to the musicians who want and make a change.

Again: What do we want? Pension contributions, pay scales and protections on recordings at NYC clubs including Jazz Standard.

END_OF_DOCUMENT_TOKEN_TO_BE_REPLACED

Three days ago my union endorsed Bill de Blasio to be the next Mayor of New York City. Honestly I don’t know whether he’s the right guy to be on the J4JA bandwagon. I don’t know what he has promised the union…us. But in case he forgets the J4JA campaign, I promise you that I and my musician friends and colleagues – who believe and are active in this campaign – will remind Mr. Blasio of all the promises he did to our Local 802 President Tino Gagliardi. Today I registered to vote. This will be the first time for me voting!! I have no idea who I’ll vote for…de Blasio? Hmm…will do my research. Try to meet him and ask him how he would clean up the NY jazz music club scene. I’m old enough not to believe what politicians promise in their election campaign. President Obama is a good example for this. What Mr. Obama promised during his election campaign and what he has achieved as the president by now are two worlds.

Anyway I can’t endorse Bill de Blasio at this time because I still don’t know what he really stands for (but please watch the video below in which he announces his candidacy). In the next weeks I’ll try to find out why my union endorsed him. I’ll try to find out why the leader of the campaign Bob Cranshaw what he thinks of this man. Are we really endorsing a politician who wants to fight for the J4JA campaign? Or is his intention only to use our votes and money to win the election?