…The blues had a baby and they named it harmolodic. 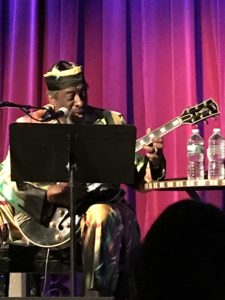 The legendary guitarist James Blood Ulmer performed an amazing solo concert at the City Winery last Thursday night in the West Village. It was a truly intimate show in a brand new cozy upstairs space called the Loft above the Winery. At 78 years old, Ulmer remains an impressively foreboding figure even before he plugs his guitar into his amplifier. Befitting someone of his renown, he’s a big man. Dressed in African garb, and sporting a grey beard, he walked slowly to the stage and immediately began conjuring his signature sounds from his uniquely-tuned Gibson Byrdland. A guitar-playing friend of mine who attended the concert with me noted how difficult it must have been for Ulmer to step on his wah-wah pedal considering the giant boots he was wearing.