Here is another new Sven Kacirek video Nutcracker/Pas De Deux again made and produced by the German video artist Agnieszka Krzeminska. As always I love the visuals which really match well with the soundtrack of the video.

For many years, my friend and music colleague Sven Kacirek has been closely collaborating with the choreographer Antje Pfundtner, whose next modern dance production, The Nutcracker, will premiere at Kampnagel in Hamburg, December 12, 2012.

Antje Pfundtner is one of Kacirek’s favorite modern dance choreographers. Previously he composed music for her two dance pieces “Res(e)t” and Tim Acy and Die Kandidaten.  For this occasion Kacirek  re-recorded and re-arranged Tschaikowsky ‘s composition Pas de Deux. The music is mostly electronic with some analog sounds in it. Very ambient, minimal and repetitive.

END_OF_DOCUMENT_TOKEN_TO_BE_REPLACED

Here is a new Sven Kacirek  video by Agnieszka Krzeminska. The soundtrack is “Old Man Small Studio” from his album The Kenya Sessions. I love the visuals which really match well with the soundtrack. Enjoy!

Who is Sven Kacirek?: interview

END_OF_DOCUMENT_TOKEN_TO_BE_REPLACED 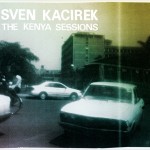 END_OF_DOCUMENT_TOKEN_TO_BE_REPLACED

A new video by Sven Kacirek! The video for ” Paper Flowers ” (from his recent released album SVEN KACIREC, THE KENYA SESSIONS) with images of the Ali Khamed Orchestra in Kenya and Sven playing at his studio in Hamburg (Germany). Cool video: sound and images match very well!

Sven’s album is nominated for this years prestigous German “Prize of the German Record Critics’ Award“!!