It was incredible to hear Momin on drums in Tarana, with the exquisite accompaniment of Trina Basu on violin, mixing live percussion with trademark electronics. They slowly built up a loose framework for the extensive and soulful improvisations, playing most of the 4 new tracks on the new EP After the Disquiet. The achievement of Tarana is that with even the most traditional of folk-Hindi rhythms as a point of departure, their songs can take subtle turns down different paths to a more Middle-Eastern or Asian sound, then more modern, and can often switch mid-piece without any jarring or noticeable transition point.

END_OF_DOCUMENT_TOKEN_TO_BE_REPLACED 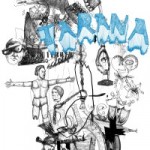 Drummer, improviser, and experimenter Ravish Momin is the guiding force behind Tarana, and on his latest EP, After The Disquiet, his jazz, world, Indian, and electronica roots are mixed with violinist Trina Basu’s plaintive strains and pulsing lines. This collaboration leads into melodic territory and beyond for over 35 minutes, with both instrumentalists leading and building off of eachother in fluid improvisations in real time. END_OF_DOCUMENT_TOKEN_TO_BE_REPLACED