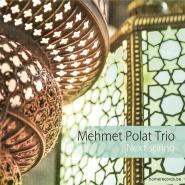 Collaborations between musicians of different traditions are a peculiarly modern phenomenon. Sometimes this produces nothing more than a contradictory hybrid. Yet, many times, the masterful and insightful blending of different cultures produces a balanced and complete aggregate greater than the sum of its parts that enriches all culture and the traditions and spiritual vision that emerges from it. The later is exemplified by the work in the Mehmet Polat Trio’s CD Next Spring.

END_OF_DOCUMENT_TOKEN_TO_BE_REPLACED

Text and photos by Jeff Greene

The city of Baku, the capitol of Azerbaijan, located below the Caucasus Mountains on the edge of the Caspian Sea, is a fascinating blend of east and west, old and new. In the late 1800s, numerous “oil barons’ mansions” were built alongside the existing ancient Islamic walled city in a strange mixture of architectural styles that mixed European classical, Art Nouveau with Persian eclecticism. Since the collapse of the Soviet Union 20 years ago, Baku has experienced another oil-fueled building boom of modern skyscrapers. But nothing seems to capture the essence of the Azerbaijan psyche the way that traditional Mugham music does.

The two Jeff's with the staff of the conservatory