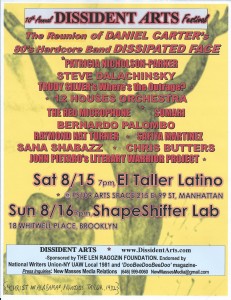 END_OF_DOCUMENT_TOKEN_TO_BE_REPLACED

John Pietaro‘s obituary of Ornette Coleman was published in “ConterPunch” magazine, Check it out: http://www.counterpunch.org/2015/06/15/ornette-colemans-revolution/

END_OF_DOCUMENT_TOKEN_TO_BE_REPLACED

Woodrow Wilson Guthrie was born on Bastille Day, 1912 and some say that revolution was his birthright. Few before him, or since, can lay claim to the mastery of protest music as honestly as Woody. Though he battled the ravages of Huntington’s disease in his later years and lived only into middle age, his time remains eternal. And his life story is the stuff legends are built on.

75 years ago today, February 23, 1940, Woody completed work on an acerbic song of fight-back he then sang as “God Blessed America For Me”. Later, upon further reflection, Woody shifted its emphasis to include an embrace of the nation’s beauty and promise as much as it damned its inequity. “This Land is Your Land” has, through the decades, come to be seen as the ultimate folk revival song, indeed, our second national anthem. A closer examination of it, though, reveals the revolutionary core.